Christopher A. (Cal) Lee was the first recipient of the Paul Evan Peters Fellowship for graduate study in the information sciences or librarianship. At the time of the award, Mr. Lee was in the doctoral program at the University of Michigan School of Information, having completed his master’s degree at Michigan in 1999. 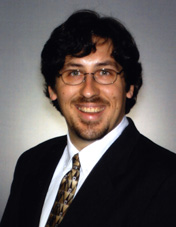 Mr. Lee had already made important contributions to the field of digital preservation as a research assistant for the CAMiLEON Project, a joint effort of the University of Michigan and Leeds University in England. He had applied his expertise in a variety of contexts, including developing an electronic records management program for the Kansas State Historical Society and acting as a consultant for the National Historical Publications and Records Commission (NHPRC).

In keeping with the fellowship’s emphasis on civic responsibility and democratic values, Mr. Lee’s contribution to the preservation and accessibility of records at the University of Fort Hare in Alice, South Africa, was especially noteworthy. The University of Fort Hare, which is the oldest black university in South Africa and was an important site of resistance to apartheid, has become the official repository for the records of the African National Congress and other key political organizations. In 1998, Mr. Lee served as web site developer and technical advisor for the National Heritage Cultural Studies Centre at the university, helping to preserve and make available irreplaceable historical records. His devotion to public service is also evident in his work as an AmeriCorps*VISTA volunteer in Puerto Rico in 1996-1997.

University of Michigan professor Margaret Hedstrom praised Mr. Lee’s scholarship and the fact that he “is deeply concerned about the relevance of research to practitioners.” According to Dr. Hedstrom, Mr. Lee “shares his ideas and insights freely, and imagines many creative alternatives to technological and bureaucratic impediments.” Hedstrom notes, “I knew Paul Evan Peters well, respected him tremendously, and was deeply saddened by his untimely death. . . . Cal embodies many of Paul’s qualities and will perpetuate his values.”

A five-member committee selected Mr. Lee from a field of more than 130 applicants. The committee included Wendy Pradt Lougee of the University of Minnesota, George Brett of Internet2, DeEtta Jones of the Association of Research Libraries, and Clifford Lynch and Joan Lippincott of the Coalition for Networked Information. Lynch commented, “We had a fabulous pool of developing leaders among the applicants for the award; Cal Lee is an outstanding choice as first recipient of the fellowship. I know that Paul Peters would have been very pleased both by the pool and by Cal’s selection.”

The Paul Evan Peters Fellowship was established to honor and perpetuate the memory of the founding executive director of the Coalition for Networked Information. Funded by donations from colleagues, friends, and family, the fellowship provides a two-year award of $5000 per year to a student who demonstrates intellectual and personal qualities consistent with those of Peters, including:

— A commitment to the use of networked information and advanced technology to enhance scholarship, intellectual productivity and public life;

— An interest in the civic responsibilities of networked information professionals, and a commitment to democratic values and government accountability;

— A positive and creative approach to overcoming personal, technological, and bureaucratic challenges; and

Application information is available on online.