Courtney Loder, a PhD student in the Department of Informatics at the University of California at Irvine (UCI), is the 2012 recipient of the Paul Evan Peters Fellowship for graduate study in the information sciences or librarianship. The fellowship, which was established to honor the memory of CNI founding Executive Director, Paul Evan Peters, recognizes outstanding scholarship and intellectual rigor, as well as civic responsibility,democr 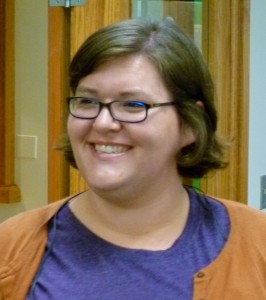 Loder, who has a BA in history from Humboldt State University and a Master of Library and Information Science from the University of Pittsburgh, was selected for the Peters Fellowship, in part, due to her work using social theory to investigate the relationship between technology and social activity.  Of her pursuits, Loder writes, “the ultimate goal of my research is to bring computing and the social together to provide a better understanding of how each can support the other, and to use this understanding in exploring new ways to facilitate connection between people, institutions, and space.”  Loder’s extraordinary academic performance, creative investigative approaches, and her “quick wit” (like that of the award’s namesake), were all factors that contributed to her selection.

Recognized for her skill and commitment, Loder was selected as assistant director of the University of Pittsburgh’s iSchool Inclusion Institute (i3), funded by the Andrew W. Mellon Foundation; the organization’s purpose is to recruit and develop students from populations underrepresented in the information professions and to help them prepare for graduate study.  Respected by her peers, she has also served as chair of the University of Pittsburgh’s American Society for Information Science & Technology (ASIS&T) student chapter.  “I have been most impressed both by her scholarship and her humanity,” wrote UCI Professor Geoffrey Bowker, who recommended Loder for the award.  “She meshes perfectly the skills of a programmer and the ethos of a librarian.”

Virginia Steel, University Librarian at the University of California, Santa Cruz, and a member of the selection committee, noted that Loder “shows exceptional promise of significant contributions in the future as she pursues her career interests.  Her doctoral research will include the creation of tools to facilitate and enhance effective social interaction across space and time.  Ms. Loder’s dual interests in technology and the people who use it are an excellent match with Paul Evan Peters’s deep commitment to using technology to improve society.”

Other selection committee members included:  Pamela McQuesten, Vice President and CIO at Southwestern University; James L. Mullins, Dean of Libraries and Esther Ellis Norton Professor at Purdue University; and Joan Lippincott, Associate Executive Director of the Coalition for Networked Information.  “Courtney is a great choice from an outstanding pool of candidates,” commented CNI Executive Director Clifford Lynch, “and I think that her work and her aspirations honor so much of Paul Peters’s core beliefs about technology and its promise for social good.”

The Paul Evan Peters Fellowship was established to honor and perpetuate the memory of the founding executive director of the Coalition for Networked Information. Funded by donations from colleagues, friends, and family, the fellowship provides a two-year award of $5000 per year to a student who demonstrates intellectual and personal qualities consistent with those of Peters, including:

— A commitment to the use of networked information and advanced technology to enhance scholarship, intellectual productivity and public life;

— An interest in the civic responsibilities of networked information professionals, and a commitment to democratic values and government accountability;

— A positive and creative approach to overcoming personal, technological, and bureaucratic challenges; and