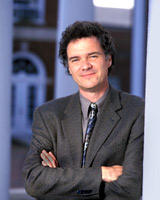 “Colleges and universities need to form alliances and consortia, both temporary and longer lasting, to bring faculty members together. They also need to find productive ways to work with information-technology companies to create new forms of scholarship. And they need to ensure that our libraries are sustained as they struggle with the demands of a whole new world of digital media.”

Edward L. Ayers is Dean of the College and Graduate School of the Arts and Sciences and Professor of History at the University of Virginia. He is perhaps best known to the CNI community as co-founder of the Virginia Center for Digital History and for his own pathbreaking work, Valley of the Shadow: Two Communities in the American Civil War. Valley of the Shadow, a richly textured examination of everyday life before and during the Civil War in a northern and a southern community, has attracted more than three million visitors to its Web site, and in 2000 won the first annual eLincoln Prize for best digital work in the era of the American Civil War.

Ayers has led the field of history in exploring the challenges and transformative power of new technologies. In a recent essay about his decade-long quest to understand the revolutionary promise of computing for humanities scholarship, Ayers argued for breaking down “departmental boundaries that constrain innovation.” In December 2003, he and his colleague William G. Thomas published The Differences the Slaves Made: a Close Analysis of Two Communities, for the online version of the American Historical Review that made new historical arguments and experimented with an entirely new form of history scholarship.

Ayers has written and edited eight books and has been named a finalist for the National Book Award and Pulitzer Prize for his 1992 work, The Promise of the New South: Life after Reconstruction. He is also an acclaimed teacher, known among students at UVA for his spellbinding classroom performances. In 2003 the Carnegie Foundation for the Advancement of Teaching and the Council for Advancement and Support of Education named Ayers the National Professor of the Year for doctoral and research universities. He currently serves on the Board of the Council on Library and Information Resources and the Board for the National Council for History Education. 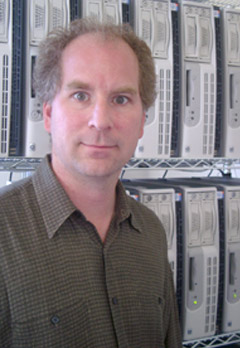 “I don’t really have a philosophy about technology. I have a philosophy of what future I want to live in . . . . What I’d really like to see is a world where there’s no limitation on getting your creative ideas out there. [A world where] people have a platform to find their natural audience. Whether their natural audience is one person, themselves, or a hundred people, or a thousand people. . . . make it so that people have an opportunity to flower. To live a satisfying life by providing things to others that they appreciate.”

A long-time proponent of the transformative power of digital libraries for human culture, Brewster Kahle founded the Internet Archive in 1996 to provide “universal access to all human knowledge.” In cooperation with institutions such as the Library of Congress, the Smithsonian Institution, and the National Science Foundation, the Archive preserves and provides access to Web sites, movies, music, and more—currently some 30 billion pages of information—that might otherwise disappear forever from the ever-changing digital universe. Researchers, historians, and the general public have access to archived Web pages from 1996 to the present via a searching service called the “Wayback Machine.”

Kahle believes that technology should be used to allow human creativity to flower, and he has managed to put this idea into practice for more than twenty years. As a student at the Massachusetts Institute of Technology, Kahle studied artificial intelligence. After graduating in 1982, he helped found Thinking Machines, a supercomputer manufacturer, where he worked as an engineer for six years. In the late 1980s Kahle invented a system for publishing and disseminating information via the Internet. His system, known as WAIS (Wide Area Information Server), was purchased in 1995 by America Online, giving Kahle the resources to found the Internet Archive. Later, Kahle founded Alexa Internet, a company involved in collaborative search and resource description, which was acquired by Amazon.

Kahle’s devotion to bringing the world’s cultural heritage to as broad an audience as possible has sparked another innovative project—the deployment of “Internet bookmobiles”. The bookmobiles use satellites, laptops, and high-speed printers to download and print books for people all over the world who lack easy access to bookstores and traditional libraries.